How I Made $350k in Financial Tournaments

Between 2015 and 2020 I have participated in Quantopian and Numerai tournaments. Being involved in these tournaments has led me to a very profitable journey: I made around $350k during these years.

Many people have reached out to me and asked how I did it. I decided to write this post to inspire others with this non-conventional path.

In 2015 algorithmic trading was one of my interests. This is how I came across Quantopian, a platform that provides data and tools, so anyone can develop and test trading algorithms. After learning the basics and playing around with the platform, I decided to submit an algorithm to their recently created tournament.

One of those potential buyers was particularly interested, shockingly enough, even after I explained to him how simple my algorithm was. I eventually shared the code with him for free. Still, he expressed his desire to send me the amount he offered in the first instance. And that's how I made the first $2k out of participating in ML/financial tournaments.

Getting The Dream Job

During these weeks I exchanged many emails with Apple employees, financial quants, people from Europe, Asia, or America. But the best interaction came from a guy from my town. He was building his own trading algorithm and was interested in my approach. I meet him a couple of times. Obviously, his knowledge was years ahead of where I was at that time.

Those meetings were very productive, especially for me. After discussing with him about our personal and professional interests, and how difficult it was to find good jobs in our city, he introduced me to my next employer. Of course, I was not aware of it at that time. He introduced me to the CEO of an ad-tech company, and at first glance, I saw many things in common between this sector and high-frequency trading. The offered position (not publicly opened at that time) would also allow me to face and try to solve many machine learning, big data, and architectural challenges.

After a few weeks and a couple of meetings, I decided that the company was an excellent fit, a place where I would continue professionally growing and developing as a data scientist and engineer.

For years, we worked on building a solid platform that led us to be acquired in 2018. The experience was great and the outcome even better. Including the exit bonus, I made a big sum during this period.

In 2016, I discovered the Numerai Tournament, "the hardest data science tournament on the planet" as they claim. Numerai is a weekly global data science tournament to solve the stock market. Data scientists work with clean, regularized, and obfuscated datasets provided by Numerai to create machine-learning models to predict the stock market. Numerai builds a meta-model of the most unique and contributive predictions and uses this to command the capital in its global equity hedge fund. 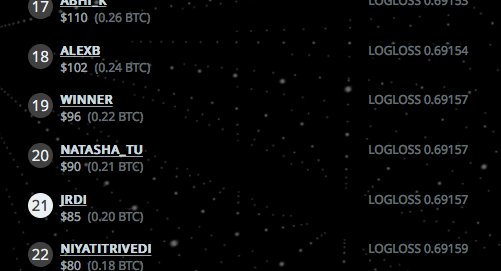 In early 2016 I had finished a few rounds in good spots, as you can see in the image. After a few months of actively participating, I ended 2016 with around 0.5 BTC. It was cool, but it required too much of my time. I had other priorities, so I withdrew the earnings and left the tournament.

Almost a year later, a post about a Numerai airdrop came across my timeline. After login back into my account, I discovered I received 1800 NMR.

At that time, the amount was valued around $30k, so I initially decided to withdraw almost everything, but something changed my mind and I started buying and selling altcoins. After some back and forth, and some lucky movements, I ended accumulating a wallet valued at around $100k.

2017 was arriving at its end and I took the last lucky movement, I withdrew half of that sum a few weeks before the bitcoin crash. I still hold the other half but it wasn't easy to stick to that decision during 2018, while cryptos prices continued decreasing.

In July 2018, I came back to Numerai Tournament. I made some submissions but I didn't take it seriously again until mid-2019.

Since then, I have had a cumulative return of +141%. I have built an algorithm with an average weekly return of +2%, which taking into account the compounding effect it translates to +180% annualized total return.

I'm going to continue participating in the Numerai Tournament, if everything continues as it is now, it would provide a good income without requiring much effort. I will also continue taking small bets, experimenting with other projects, continue doing things I like, and learning in the process.